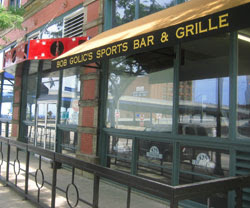 If you’ve driven down West Sixth Street recently you’ve probably noticed there is a new bar in the works at the corner of Lakeside Avenue: Bob Golic’s Bar and Grill, which is scheduled to open by (or perhaps even before) Labor Day. As a current resident of the Warehouse District and a die-hard Browns fan, I can only say that this is amazing!

My gut feeling is that this bar will succeed based on a few simple reasons:

1. Cleveland is a football town, and a bar named after and operated by a former Browns’ player will succeed. (Look how well Al “Bubba” Baker’s Bubba Q’s is doing in Avon)

2. It occupies prime downtown real estate. Coming off the Shoreway, this is the first thing people will see and I can say that it has drawn interest. I have heard people talking about it a lot in the two weeks since the awnings went up with Golic’s name on it. I have been one of them. I can say that I will be in this place probably the first day it opens.

Word is pricing will run $10 to $12 for lunch, with similarly priced entrees available for dinner, alongside dishes ranging upwards of $30. Expect pizzas, salads, corned beef and French dip sandwiches.

But let’s not forget the beer/sports-viewing statistics:

Expect to find 20 big screen TVs, a draft beer system featuring at least 15 to 20 specialty drafts and local brews, as well as a radio transmission area where Golic can do live broadcasts.

Yup, that’s right you’ll be able to find all your Great Lakes Brewery favorites, listen to Bob Golic live during his radio shows and hopefully see some guest appearance by either ESPN or WTAM 1100. We’ll see what happens. Boy I can’t wait!