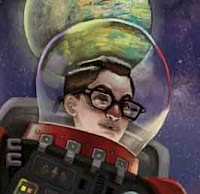 Sometimes it's like getting a letter from a friend buried in a pile of junk mail. These two showed up yesterday.

The Francis Blog takes on our Sexy Singles issue: "I was looking through the latest edition of Cleveland Magazine ... which is profiles of some of Cleveland’s most famous (and sexiest!) singles. I only got two in and realized that I could write a fairly epic blog about them so I decided to cap it there." Honestly, it is pretty epic.

And then I got an alert on LAZ, Lazaro Gamio, a student at CIA. His Cosmonaut Kid sketches — and the finished book spread — are really cool. The character (at left) reminds me of something my kids watch, but I can't put my finger on it. At first I thought it was the main character from Disney's Atlantis, but that's not it. I can't wait to see what his little truck sketches turn into -- or what gem my next Google Alert brings.
Posted by Steve Gleydura at 8:34 AM